Ubisoft was once one of my favorite developers, but lately, they’ve had some rocky launches and this was no exception. Unisoft Montreal isn’t my favorite Ubi studio but they are one of the better ones. I was far nicer in my review of GH Breakpoint than I needed to be. I couldn’t stomach Watch Dogs Legion for longer than 2 hours. As my third consecutive buggy, disappointing launch, it’s hard to remain an Ubi believer but I still am. But don’t worry, Valhalla has a lot of redeeming qualities. So let’s take a leap of faith, and dive into the 12th installment in this widely successful franchise.

If you want to skip the read, you can watch my review video embedded below or view it directly on YouTube.

Since the introduction of Origins, AC has been leaning less on stealth combat. With Oddysey, we saw RPG and Romance options completely new to the franchise. ACV was more melee combat-focused than any other previous release, despite it bringing back more sneak options when roaming around select territories. It felt very much like a copy/paste duplicate of Origins that was heavily adjusted to fit this game’s change in combat and narrative style.

My overall score for Assassin’s Creed Valhalla is 7.6 / 10 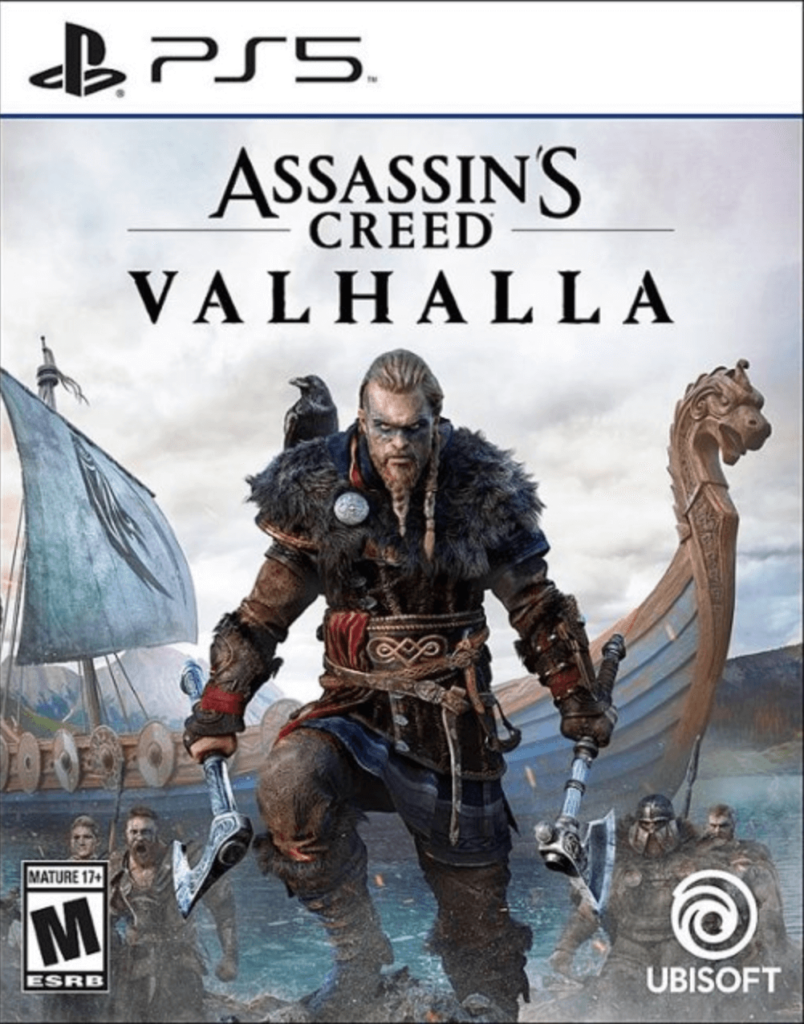 The opening 15 minutes were pretty action-packed, giving us a few solid clues for the plot. If only the next 3-4 hours followed suit. There were a lot of pacing issues in the development of the story that could have been addressed by removing some of the grinding. The ebbs and flows of the tale were a juxtaposition of itself. There were times when I couldn’t wait to see what would happen next. But unfortunately, there were more times where things fell flat and I was left with no excitement for what was to come. I did enjoy how much more they committed to the RPG portion of the game, giving you two different endings (a good and a bad) but they weren’t that drastically different. Still a much-improved direction towards more arcing and character development changes that I expect to come in future games.  By the time you stumble across the 2 main plots, the obvious one and the hidden one, I was pleasantly pleased. This game isn’t just an addition to the series, it ties them all together. Where they are going to go from here DOES excite me. The last 5 hours of the story ALMOST redeems the misery of how long it took us to get there.

This was an interesting parallel of the game and one I can’t say much on so that I don’t spoil things. But I did very much enjoy the core of who the characters were and why. What I didn’t enjoy was the personalities and mediocre development of those characters. I didn’t find a ton of likable personalities in the game and none of the romance options or story arcs blew me away. But I can’t take away from what they did and the cleverness of the monkey wrenches they through into the story because of those personalities. Eivor was likable but not the most memorable protagonist. Randvi was lovely but sat at a map table. Sigurd was easy to grow annoyed with. Sidequest characters, outside of Flyting partners, just felt dull on most occasions. 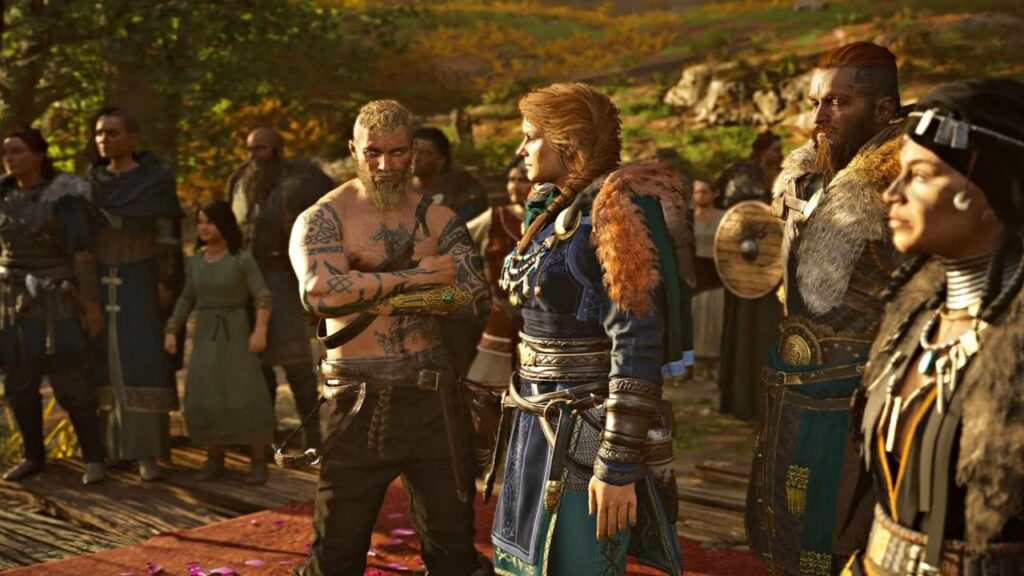 This game was bloody. The combat was brutal. The melee on this game was pure carnage and that’s what made this game so popular and well-received. The combat abilities, skill tree, and dual-wielding weapons were a unique but brilliant change. While it required too much grinding, the addition of raiding and settlement building added components to keep the title fresh and unique. Ironically these things were repetitive and became stale. Another extension of the game required you to make allies who would later join you for the end game battle. As with a lot of open-world games, this title suffered from a significant amount of bloat. I found myself doing stuff I didn’t enjoy frequently, just to get more storyline, more gear, or rank up. But damned was raiding, fighting, and the new combat abilities fun! Despite some complaints, I really enjoyed the addition of the stamina bar, forcing you to strategize your combat with more precision.

This game features 5 sprawling worlds centered in 873 CE, and they are beautiful. It’s mostly the addition of 4k but the textures, colors, and views were striking. Norway was cold but even the sunlight filtering off of the semi-wet snow was realistic. England had stark and diverse differences from the warm woodsy South, the swampy marshes, the frigid mountain terrains. The greenery of Vinland, the icy grip of Jotunheim, the mysterious otherworldly beauty of Asgard. Sunrise and sunset are true visions to behold. Each synch point adds a new level of design brilliance. It’s not just a gorgeous set of maps, but it’s easy to navigate. With horses that can be taught to swim and longboats that can follow the coastline automatically, you can now not only get places easier and faster but enjoy the ambiance while you’re at it. 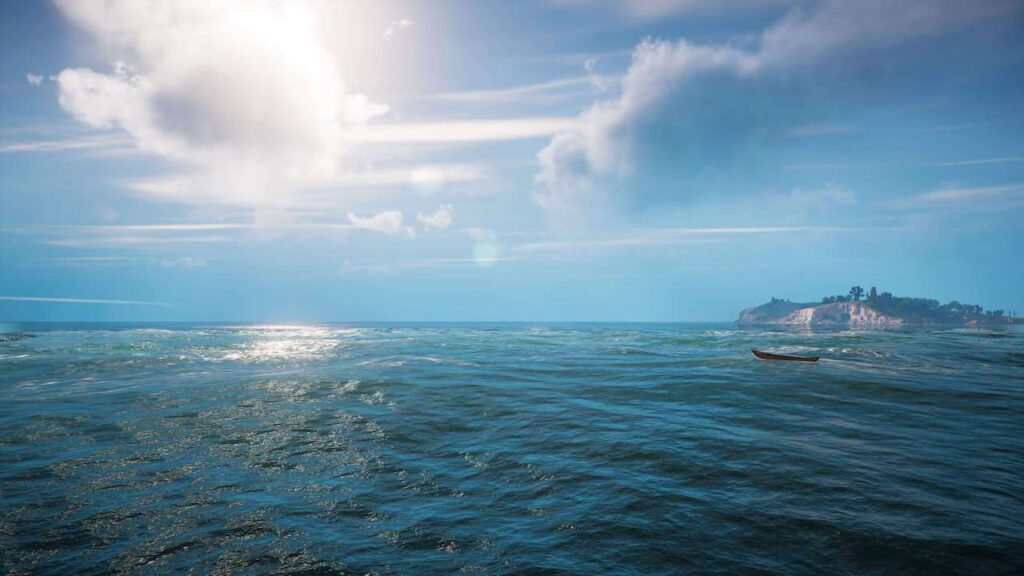 This is where this game tested my patience. The main story was 40 hours in length. The game with the story and moderate exploration should take 60-90 hours. It took me 80 to beat the main story and 120 for around 70% completion. With 100% completion tipping over 200 hours. This was due to game-breaking bugs and performance issues. I started on PS4 and experienced crashing and framerate issues. Moving to PS5 about 8 hours in address those issues, but didn’t fix the numerous glitches that ruined the game having a fluid, or quicker, experience. The worst glitch took 4 whole days to get through. NPC interaction, picking up items, weapons, romance options, questlines. I found so many issues in the game that drastically added time and aggravation to what would have been a much more delightful experience. Overall as pretty as the design was and as good as the fight mechanics were, it felt like a rushed, unpolished game. And the PS5 version wasn’t very optimized but I can’t score that against them as the primary hardware intent wasn’t the newest gen.

Where the game had levels of exhilaration and charm, it also had just as many levels of frustration and discouragement. Button mapping was fluid and the skill tree was very well thought out and implemented. Raiding with Viking hoards was unquestionably entertaining. Feast Buff bonuses and level two abilities added a level of badassery to the game that was downright thrilling. But loot drops were poor and ranking up gear required a lot of exploration and grinding. Finding the secret bureaus added quality gear worthy of the challenge but the best pieces came at the last moments of the game, or through microtransactions. The Parkour was remarkably janky and stealth assassinations were clunky. But finishing moves with a variety of one and two-handed weapons was a work of art. Combat choreography was as precise and smooth as a principal ballerina.

I hope you enjoyed my Assassin’s Creed Valhalla review! Thanks for reading and don’t forget to connect with me on Facebook or Instagram for more gaming related content, news, and reviews.