The Outer Worlds is Outta This World

The Outer Worlds isn’t the best choice, it’s Spacer’s Choice! This game is a true Role-Playing video game with well thought out dialog options. It’s far more an RPG than an open-world action game. It has a New Vegas feel to it but it’s a very, very different game. It’s not a knock off or even a duplicate, it’s an entirely different game.

My first introduction to the Fallout series was New Vegas, a true masterpiece by Obsidian. A not well-known independent developer. Most commonly known for New Vegas or Knights of the Old Republic. There’s no confirmation this game is an ‘in your face’ move to Bethesda but Obsidian sure outdid themselves with this one. Leave the drama and fandom wars aside, this game is thrilling unless you hate thinking about your actions and the potential consequences. 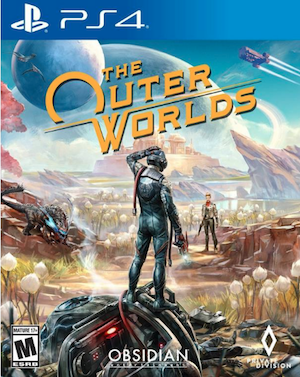 You are the Unplanned Variable. Hundreds of years in the future Earth is running out of resources and humanity is now residing in the Halcyon System. You are frozen on the Hope colony ship. One of Earth’s best and brightest sent to restore balance, only your skip drive malfunctioned and you were frozen nearly 100 years longer than planned. Crazy scientist Phineas Welles thaws you and sends you on a mission to obtain the chemical needed to thaw your peers and bring back thriving colonies. But it isn’t that simple. The ‘bad guy’ is determined by you. The way to save humanity is determined by you. Every single action and dialogue option will change the outcome of the game. Every skill you have or haven’t acquired will make a difference. The way you treat your companions and interact with other factions in the game will change, grow, adapt, evolve. Nothing is as simple as it seems. What truths will you uncover and what outcome will the galaxy have in your hands?

I am almost done with my third playthrough and I got 3 WILDLY different endings. It’s simply a really good story with really well thought out dialog options. It’s fun, it’s addicting, and it’s only around 30 hours so you can experience 2-3 playthroughs within the same time frame it’ll take you to do one run-through of Fallout 4, AC Oddysey, or RDR2.

The Outer Worlds story gets a score of 5 / 5

All factions in this game have their morally negative and positive benefits. Making you decide who is a villain and who is an ally. But can you keep it way and by the end, do you want to? The NPCs in this game are hilarious. There’s toilet humor, emotions, and sad stories. I have truly enjoyed all my companions and ADA, my navigation system aboard my ship, the Unreliable.

They are all so LOVEABLE. Even Vicar Max and his raving sermons. Ellie and her careless attitude. Felix and his rebellion against the system. Parvati and her massive naivety. Nakoa and her fearless hunts. Sam and his desire to clean. Each has a backstory and a task you can help with if you chose to. Beware, because unlike other games, every single NPC and person within the game can be killed and will not respawn. Factions will not forgive your actions. Unlike a lot of other games, the NPCs in this game do serious damage! They provide unique skill boosts. My favorite part is that stealing is not part of their karma system so you can easily acquire what you need in the game.

I give The Outer Worlds Characters a 5 / 5 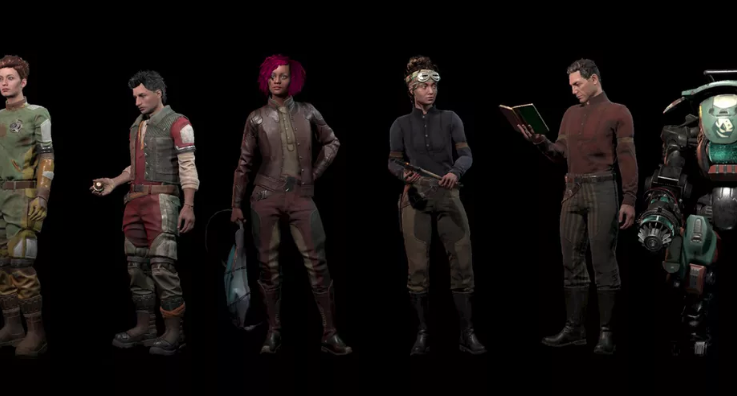 What’s really a pain is that you’re responsible to loot, purchase, and upgrade weapons and armor for your crew. They can die in combat and unless you have the right perks unlocked, you cannot revive them. You can also literally walk right through them which is one of my favorite parts of the game! No longer do companions stand in a hovering position blocking you from moving past them. I love the karmic system of the factions, meaning you can be adored and feared at the same time. Actions don’t wipe other actions out. It’s more realistic. But the loot in the game is awful. Crappy drops so you need to plan on acquiring and spending a lot of bits. The best stuff you’ll get is from vendors. The best pricing for repairing and tinkering is on your ship where more crew gives you skill bonuses. I like how you rank up your companions and how you can pay bits to reconfigure your own skills and attributes. Picking up items is hard because you have to be hovering over them in the EXACT spot. The controls are easy to learn and the difficulty is very consistent throughout the game. It’s a smooth game without a lot of cosmetic complaints. You can be good, you can be evil, you can be both. You can travel alone or with others. You can repay Phineas your loyalty or turn him into the board.

What will you do as the unplanned variable?

The gameplay of The Outer Worlds gets a 4 / 5

The Halcyon system is filled with places to go to. Earth-like Terra 2, the moon Monarch, Scylla the asteroid. Relay stations, abandoned transport ships, science labs, prison planets. My personal favorite, the Groundbreaker. An independent housing ship. The maps are small and the game requires you to navigate around in your ship often. There are uninhabitable planets leading me to believe that there will be DLC available in the future. While the NPCs and faction members are the smoothest, the game is detailed. Crisp, bright open planets crawling with danger. Murky dark asteroid fields with mercenaries and primal beasts. Beautifully landscaped environments with mantis queens and hacked mechanicals.

The Outer Worlds Graphics gets a 4 / 5 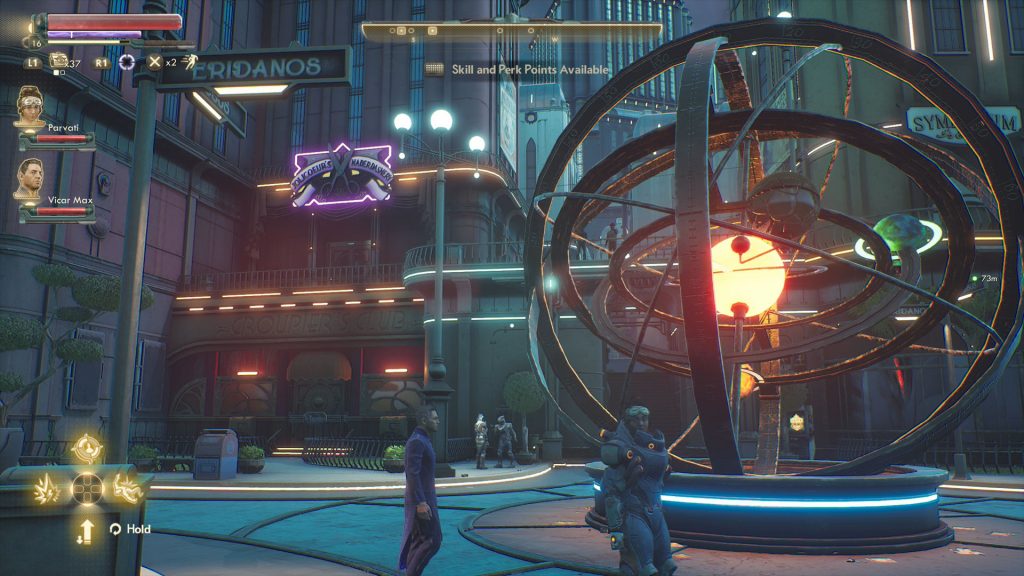 It’s not a very glitchy game but there are some small bugs or things that don’t work perfectly here and there. Overall it’s well planned, developed, and tested. When there were some major game-changing bugs early on, it was fixed very quickly in a patch. Some of the sillier imperfections are absolutely hilarious. I almost wonder if that was the point Obsidian had in their decisions. Every so often the frame rate drops or actions lag but nothing that makes gameplay feel more than minorly affected.

Performance of The Outer Worlds gets a score of 4 / 5

The Outer Worlds is a must-play unless RPGs and role-playing scenarios are not your things. Let’s connect on Twitter or Instagram and don’t forget to share with me your thoughts on the game, what faction you sided with, and who your favorite companions were. And remember, when you’re having a hard day, try Zero Gee Brew, the ale for what ails you.