With PlayStation 5 being, literally, right around the corner, I wanted to reminisce on all of the brilliant, addictive, immersive journies the PS4 has given us. So here are my 10 best single player games on ps4. And yes, they are in order. 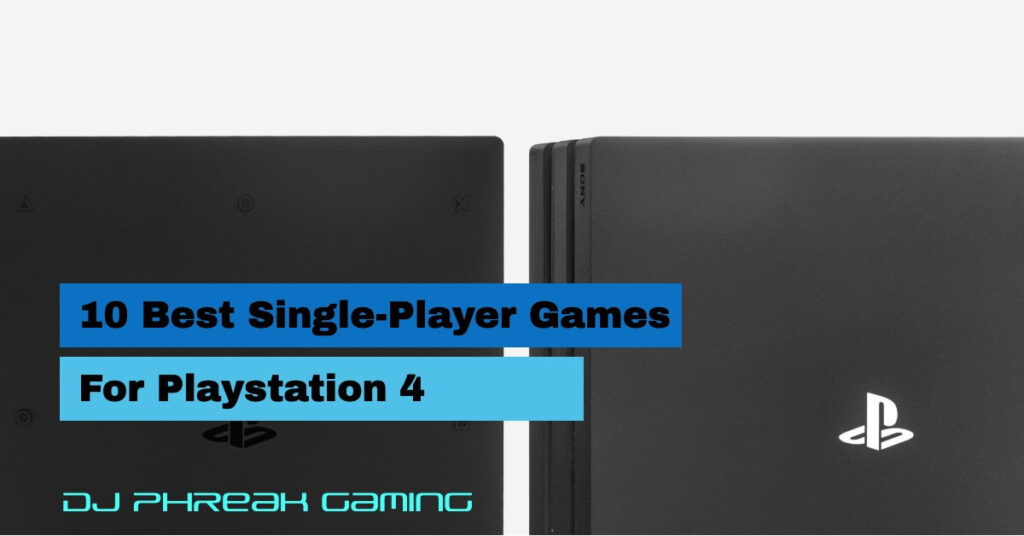 Here are the 10 games that took my breath away

This game had EVERYTHING. Immersive open-world, exploration, linear storyline, side missions, upgrades, fluid combat, armor upgrades, NPCs, boss fights, and incredible attention to detail. Probably the only massive game I’ve played that didn’t have glitches. It was a near-perfect journey. A true narrative masterpiece with a storyline I fell in love with. Aloy is one of the most loveable female protagonists in gaming. Onward to the Forbidden West, we ride.

The Last of Us Part II

A true brilliance in narrative gaming. The game takes every emotion you have and dumps it in a blender, purees them until you can’t think straight anymore. It’s dark, gory, violent, and completely depressing. There are no happy endings. Combat is addictive and the characters and their stories are extremely polarizing. It’s not a game for everyone but if you can stomach it and have an open mind, it’s one of the best journies in gaming you’ll ever have. “I made her talk” is the greatest moment in gaming history for me.

I know hating Bethesda is cool. I know Fallout is glitchy and that previous iterations of the game were better rated. But man is FO4 fun as hell. I love all the possibilities with the storyline, endings, NPCs, and how I’m constantly finding things while exploring. I love that you have to change your approach to the game to cater to your NPC companions. I mean we all want to have violent moments or pickpocket everyone in town. And I loved the story and how they tied this one up into the series. Because, war, war never changes.

This is one of my favorite games ever but I am a massive Quantic Dream fan. David Cage is one of my favorite narrative game writers and I love all of his pieces. I only wish I could add his PS3 titles to this list. Detroit is a true RPG with a lot of story branching, character arcs, and possibilities. I have yet to uncover every possibility after 32 playthroughs. Fortunately, the game isn’t a long bloated one so doing multiple runs isn’t a chore. It also feels politically correct in current times. Remember, we are alive.

Obsidian hit the mark with this. I love this game. So many possibilities but unlike typical RPGs, it’s short, you can literally do a genocide run, you can kill off NPC companions or run them off altogether. There aren’t any storyline limits in this game and it even features a potentially hilarious ending if you are dumb enough. Literally, playing with a stupid character is absolutely hilarious. It’s short enough at around 30 hours that you can really explore all those branching options too. It’s not just spacer’s choice, it’s my choice.

This game is so much fun. Trevor and Frankin are among my favorite game characters of all time. I love using the in-game stock market to make billions and buying up businesses in the end. Just screwing around modifying cars is so rewarding after playing a really fun game. I loved the story and I loved the missions. This game was brilliant because of the dynamics of the characters and the 3 potential endings you could achieve. Who doesn’t really want to pick deathwish, though?

This game is a beast. Almost too big. It has pacing issues and too many side quests. Hunting is annoying and some of the achievements bore me to tears. But it’s so immersive, detailed, and in-depth. They thought of so many aspects that are normally left out in gaming. It’s just fun and you can stick with the linear stuff or explore and do more than you could imagine on the side. I won’t lie, it made me cry. I love that good boah.

Kratos was never finer. This game had every element of a masterpiece. It was grindy and a bit tough at times but it was outstanding. That story surely will lead us to a sequel and I can’t wait to see where Atreyu’s journey goes. I only wish it wasn’t so bloated with the grind for mist pieces and little annoying fragments for armor sets. And those Valkyries…damnitt man they were hard. Oh, I’m sorry. Did I say Atreyu? I meant BOY!

This game surprised me with how good and fun it was. This is a must-play. The swing mechanics and graphics alone were breathtaking. I enjoyed the boss fights and the storyline. Even some of the more grindy parts were easy to break up with story-driven side missions.

People who love AC often bash Odyssey despite it being the highest-grossing title of the whole franchise. I loved the story and thought the DLC was even more spectacular. Gorgeous worlds, humor, fun combat, and a great story. I loved sleeping my way through the Greek islands during the Peloponnesian era. As a history nerd, I had many moments. Kassandra and Alexios are so freaking awesome and it kills me. It was a bit bloated and I hope future installments really scale back the grind, but I still love it. The Sparta kick is the most fun I’ve had in a long time with fortress clearing. “There’s another goat?” was one of the funniest lines in gaming.

What are your thoughts on my 10 best single player games for the PS4? Do you have any changes you’d like to make or comments on any of these games? Let’s connect on Twitter or Instagram for more things gaming.